Glock vs Beretta: Which is Better?

Purchasing a handgun for self-defense, home defense, or even sport shooting can be a very personal choice. The best way to evaluate any two weapons brands is to evaluate what features are most important to you, your intended use, and the objective information about the different weapons – their accuracy, weight, magazine capacity, and overall value.

Many modern gun owners are looking for a pistol that they can use for self-defense and many turn to the tried and true 9mm handgun for this purpose. Because 9mm come in a variety of shapes, sizes, and weights, it can be especially important to look at the features of similar weapons and how they serve your purpose. When looking for a 9mm, frequently the comparison turns to the Glock 17 compared with the Beretta 92.

A Look at Glock 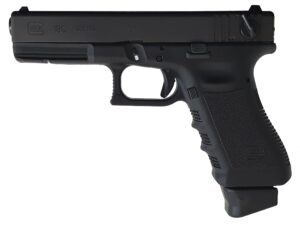 When he began engineering the Glock 17 in the 1980s, Gaston Glock was new to weapon design. An Austrian engineer, Glock was very familiar with advanced synthetic polymers, but not weapons. He assembled a group of specialists – designers, retired military and police, and so forth –  with the intent of designing a handgun for use by the Austrian Armed Forces in response to their announced search for a replacement for the P38. The Austrian Armed Forces had been using the Walther P38 since World War II.

Glocks use a high-strength, nylon-based polymer invented by their founder – called Polymer 2 – for the frame, magazine body, and other components. Polymer 2 is used to increase the Glock’s durability, making it more resilient than carbon steel and many steel alloys. The polymer makes the Glock resistant to extreme temperatures as well as caustic liquids.

The handguns are produced by the original Glock company in Austria, as well as by Glock, Inc, a division located in the United States. The handguns made by Glock, Inc. are identical in every way to their Austrian counterparts, with the exception of being stamped with USA instead of AUSTRIA.

A Look at Beretta 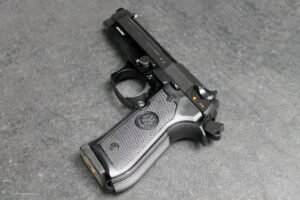 In direct contrast to Glock, Beretta is a privately owned firearms company that has been making and supplying weapons since 1526. By 1650, Beretta was providing weapons for every major European war and has been owned and operated by the same family for 500 hundred years.

In the 1980s, around the time that Glock was getting started, Beretta was chosen as the service handgun for the US Army under the designation of the M9. Although the M9 was replaced as the standard handgun throughout the US Armed Forces in 2019, it had enjoyed its place supplying the M9 to the Marine Corps, the US Navy, and the US Airforce, in addition to the Army, until just a few years ago.

In the debate of Glock versus Beretta, it’s common to compare the Glock 17 with the Beretta 92. Both are double-stack 9mm pistols. Both offer value. Both are among the ranks of the best 9mm on the market today.

The Beretta 92 is a common choice for those with a military background. It’s likely the sidearm that they used during their service, and it’s a highly reliable and accurate pistol.

The Glock, on the other hand, is one of the most used handguns in the world. It, too, is known for its reliability and accuracy, as well as being lightweight and durable.

Both of these handguns use 9x19mm Parabellum ammunition.

Of course, the larger magazine capacity makes the Beretta heavier, which, if you are looking for a weapon to conceal carry or if you prefer a lighter weapon overall, may make a difference in your choice. The Glock is a full half-pound lighter.

The Glock uses a striker-fired mechanism and has a consistent pull on the trigger. The pull is the same, every time. However, some people describe it as mushy or soft. The pistol can be retrofitted with replaceable trigger components that can be added by the average consumer after the fact, but this is an extra expense.

The Beretta uses a double-action/single-action mechanism, which takes some getting used to but is appreciated by those that have done so – such as those who learned to use the sidearm during service. If you’re willing to put in the time to get used to the Beretta, the difference in the double-action vs single-action may not matter to you after a while.

This is where the decision between the two comes largely down to personal preference.

Shooters with smaller hands may prefer the Glock 17 over the Beretta. The Beretta 92FS’s has a larger, wider grip making it necessary for some people to use two hands on the grip. Not always a problem, but it can be in the right (or wrong) situation.

The Glock has a much more comfortable grip for those with smaller hands or who want or need more maneuverability when using a single-hand grip.

Other considerations – like accuracy and cost – are very comparable for the Glock versus the Beretta. The Glock comes in at a slightly lower cost than the Beretta from most sellers, but an owner may want a few aftermarket modifications that could drive up the total cost of ownership.

Because the choice comes down to your personal need and comfort, your best option is to find a range where you can try out both pistols. Compare the weight and handgrip for preference while firing, as well as the weight for ease of use and control. Also, if you’ll be concealed carrying the weapon, be sure to compare their sizes. You might not mind a large gun like the Beretta, depending on your carry style, but it could make a big difference if you need a lighter, slimmer model for concealment – something you’ll get with the Glock.