History of the Ruger Pistol 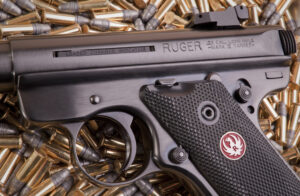 Although primarily known for its long guns, the Ruger line of pistols extends back to the founding of the company.

Officially the Strum, Ruger, & Co., Ruger was founded in 1949, which makes it somewhat of a newcomer to the American gun maker scene. Despite being founded by Alexander Strum and William Ruger on $50,000, Ruger is now a public company worth $1B today.

Ruger is the largest gun manufacturer in the United States today, having produced 1.67 million guns in 2015, including revolvers, pistols, rifles, and shotguns. By comparison, in the same timeframe, Smith & Wesson produced 1.47 million guns.

Long guns make up the majority of Ruger’s sales, but their line of pistols makes up 38 percent of their firearm sales in 2016.

Despite rifles making up the largest portion of gun sales for Ruger, the company was founded on its pistol. In 1949, when Ruger opened its doors, it started with only one product – a rimfire semi-automatic .22-caliber pistol designed by William Ruger himself. This became the inaugural member of the MK line.

Even before the .22 was launched, Ruger was considering expanding their line to include a target pistol. He hired John “Jack” Boudreau, a self-taught gunsmith and successful target shooter since 1932. Boudreau held a patent for an Olympic-style Free pistol and had proved the Ruger pistol made for an excellent target gun by winning several matches with it in September of 1949.

The Ruger .22 remains the bestselling autoloading pistol in its caliber, having produced and sold more than two million to date.

It took almost 40 years for Ruger to add a centerfire pistol to its product line. In 1987, the company released the P-Series, starting with the P85 9mm. Since its release the P-Series has continued to evolve and improve, living up to Ruger’s expectations that their products would be so good he’d “want to own one, even if it was made by the competition”.

Following on the heels of the P-Series, Ruger has produced the LC9 and LCP, with the LC standing for “Lightweight Compact”. The LC9 is a 9mm recoil-operated semi-automatic pistol featuring a locked breech, a loaded chamber indicator, and a magazine disconnect safety.

The LC380 was introduced by the company at the 2008 SHOT show. It’s a tiny, ultra-light pistol making it ideal for concealed carry and as a police backup weapon.

Ruger has since introduced a number of additional auto and semi-auto pistol lines, including the SR-series with a 9mm entrant in 2007 and a .40 caliber version in 2010. In 2011, the company introduced the SR1911, modeled after the famous Colt M1911. In 2015, Ruger released the American Pistol, a semi-auto that uses a Browning-type locked breech short recoil action.