The History of the XD Pistol 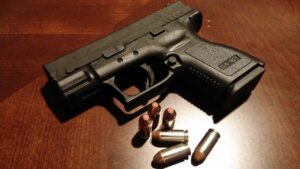 The XD is a fairly recent edition when compared to some of its counterparts, such as the 1911 and the Ruger. Despite being a modern addition, the XD has an interesting and varied past. Based off of a Croatian pistol, the XD was adapted and has evolved to meet the needs of the U.S. market.

The path to the development of the XD pistol had its humble beginnings in eastern Europe. It’s foundations tie back to a service pistol from Croatia known as the PHP. This sidearm, initially created by industrial parts manufacturer I. M. Metal, was first produced in 1991.

While the design was solid, it was challenging to manufacture anything during the early 90s in the midst of the Yugoslav War. The result was a pistol that had promise, but initially experienced issues in quality.

The designer, Marko Vukovic, and his team continued to make improvements to the weapon over time. There were two later releases of the PHP – the HS95 in 1995, and in 1999 the release of the HS2000.

Thanks to the improvements developed over the ten years since it’s initial release, the HS2000 became a reliable, well-made pistol. In fact, the increases in quality lead to both the Croatian military and Croatian law enforcement to adopt the handgun as the standard issue sidearm for officers and military personnel.

Despite its success in eastern Europe, the HS2000 experienced challenges in the move to the lucrative U.S. market. Initially sold as only a 9mm, the pistol was considered cheap by American gun enthusiasts, and the $200 price point didn’t help to shake that perception. The pistol saw limited success in its first few years in the U.S.

But in 2002, Springfield Armory, Inc., acquired the licensing rights to the HS2000. Re-branding the handgun as the X-treme Duty 9x19mm Parabellum – or the XD-9 – the handgun began to catch the interest of the American market.

Since then, Springfield Armory has continued to evolve and expand the line of the XD series.

Initially, ten models were added to the XD family. This included the inclusion of 3 separate calibers, the introduction of multiple colors and finishes, as well as supporting 5 different cartridges, and offering 7 barrel lengths.

The improvements and re-branding paid off, and in 2006 the XD-45 was recognized by the Shooting Industry Academy of Excellence and American Rifleman as the Handgun of the Year, while in 2009 that distinction went to the XD(M).

Springfield has continued to evolve and improve the pistol since then, creating new lines and features to the approval of gun enthusiasts and concealed carry owners. For instance, in 2012, significant fail-safe editions and other features were introduced in the XD-S line, with a 9mm pistol added to the S series in 2013. Sights were also upgraded, and the grip was improved to include anti-slip surfaces and aggressive texturing where needed.

Despite humble and even difficult beginnings, the pistol we now know as the XD has proven itself as favorite, thanks to flexible choices and good design. It’s clear why this pistol has received multiple awards and appeals to many gun owners.

Purchase your Clipdraw for XD here.