A Brief Summary of Events

On January 3rd of 2017, U.S. Representative Richard Hudson introduced the Concealed Carry Reciprocity Act of 2017 for consideration by the House.

It’s important to note that this is not yet law, only a bill that has been introduced for consideration to amend the current Federal laws. It’s also important to understand that this is a separate bill than the one that was introduced in the Senate, although they are similar and aim to achieve the same goal.

What is that goal? To standardize the concealed carry laws across the United States.

While all 50 states allow concealed carry to some degree, the laws are different from state to state, and that can cause confusion for gun owners.

Carry laws range from states that don’t require permits, to ones that require a state issued permit, to others that require a permit as well as reserve the right to deny that permit even if all other requirements are met.

The closest analogy, and the one used most often, is your driver’s license. A driver’s license issued in one state allows you to legally drive in another state. Not so with concealed carry. You may be legally allowed to carry a concealed weapon in your home state, but not have that right in another because the laws don’t align.

For instance, if you live in Vermont where no permit is required for a concealed weapon and you drive to New Jersey, where there are strict concealed carry laws including the need for permits and justification, you might be confused as to your ability to carry your weapon.

As it currently stands, if you’re vacationing or even temporarily living in another state you’ll have to do a lot of investigation and research to understand what the laws are in your destination, and every state that you’ll be passing through as well.

The intent of the Concealed Carry Reciprocity Act of 2017 is to simplify these circumstances. Basically, if your destination allows concealed carry, and you have a permit from your home state, you’re good to go.

The law leaves the door open, however, for more restrictive laws by states. 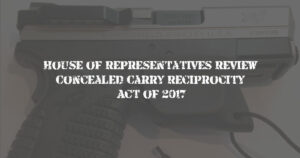 Because of the wording of the bill that is before the House – remember, there is a different but similar bill before the Senate – the Act gives the most restrictive states the ability to prevent visitors from other states from carrying by removing it completely from their laws.

In essence, we could go from every state having some form of concealed carry to some states that have no allowance for concealed carry at all. So states with highly restrictive laws now, like New Jersey, New York, California and so on, could pass new laws in answer to the Act that rescinds any right to carry a concealed weapon, even for residents.

Whats more, middle-of-the-road states that have more stringent vetting processes for getting a permit, like Illinois, Oregon, Washington, and so forth, that don’t want out of state residents carrying while they’re visiting, can make it harder to do so. By tightening the restrictions on where you are allowed to carry, both visitors and residents will see an increase in prohibited areas.

With bills before the House and Senate, it’s clear there is a desire for some kind of reciprocity for concealed carry laws and clarification on what is allowed and what isn’t. The way the House bill is written, however, leaves the door open for more restrictions, not fewer, and may spur a number of legal battles at the state level for residents and their rights to carry a concealed weapon.