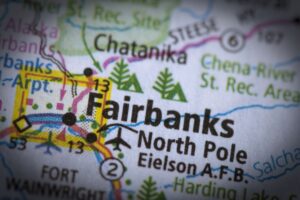 In early June, an armed bystander in a Walmart parking lot stopped an assault, preventing significant injury to the alleged victim and allowing for the arrest of the alleged assailant.

Late in the evening of June 3rd in Fairbanks, Alaska, the victim and his girlfriend were driving down Steese Highway when they were passed by a truck containing the alleged assailant, identified by Fairbanks police as Cedric Davon Davis.

As the truck passed the couple, several of its occupants reportedly made rude gestures at them. The couple then followed the truck as it turned into a Walmart parking lot.

Once in the parking lot, Davis exited the truck and approached the victim, who was seated on the passenger side of the vehicle. Davis proceeded to then punch the victim through the window of the car. At that point, the victim left the car after grabbing an oar from the back seat, presumably to continue the fight.

Once out of the car, Davis picked up the victim and threw him to the ground. The impact with the ground caused the victim’s head to be cut and bleed. Davis then began to punch the man repeatedly.

It was at this point that a bystander saw the altercation. He removed his weapon and pointed it at Davis, instructing him to stop, which he did. Davis ceased the assault, and the victim left the scene to contact the police.

After securing his weapon in his vehicle, the unnamed bystander secured his weapon and waited for the Fairbanks police to arrive.

Davis confessed and was arrested on fourth-degree assault. The bystander was not charged. Instead, Fairbanks police referred to him as a responsible gun who stopped a violent altercation.

“We had a victim that was slammed to the ground and another individual was over the top of him just kind of one-twoing him, basically. When you have an active assault like that taking place, the fear is that (the victim) is going to be overcome, knocked unconscious or worse,” Welborn said. “He wasn’t right up next to him pointing (the gun) at his head. He was at a distance, pointing it and making the guy understand, ‘you need to stop.’ And it worked.”

This did not appear to be a random encounter. As described by the police, a few of the people in the truck knew the victim and his girlfriend.