We’ve covered several stories in the past few weeks about various concealed carry and reciprocity laws moving through the systems in a few states. This week, we’ll bring you an update on a few of those stories, as well as give you some information on a new bill in South Carolina that joins others seeking to provide reciprocity arrangements for gun owners who can legal carry a concealed weapon in their own states. 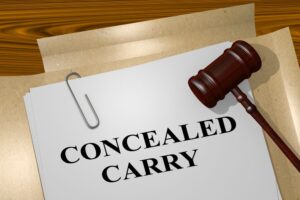 We’d previously reported on the bill moving through the Michigan state system that would allow gun owners to carry a concealed weapon without an additional permit. Hearings were held this week on the bill, with continued discussion anticipated in the next week.

Proponents of the bill point out that a gun owner can legally carry their weapons openly, without a permit or classes. But the simple act of putting on a coat makes that carrying their weapon illegal.

The focus for gun owners is that the cost of getting a permit to carry a concealed weapon appears to be an arbitrary tax on gun owners, while opponents of the bill claim that not requiring training for gun owners will make increase the dangers associated with concealed carry.

Michael Thiede of the Michigan Gun Owners Association indicated his belief that responsible gun owners already understand the value of training. “I didn’t have to take a class to tell me I was going to be safer to do all of these things. I didn’t have to give the state an extra $105. Concealed pistol permits didn’t make this state any more safe. It just made it richer.”

The Michigan House of Representatives will continue hearings the week of May 22nd, 2017.

A bill permitting constitution carry in Wisconsin gained additional support at the end of April when the Wisconsin State Attorney General Brad Schimel said he believes that the law is reasonable.

Pointing out that Wisconsin didn’t turn into the “Wild West” when its own concealed carry laws were passed, Schimel said he didn’t think that allowing those who were allowed to carry a concealed weapon in their own state would create a drastic change for Wisconsin.

In additional concealed carry news from Wisconsin, Governor Scott Walker signed a bill at the end of April that would rectify an administrative glitch for concealed carry renewals. Previously, when a 5-year concealed carry permit was renewed, it was extended for 5 years from the date of renewal. This penalized those who renewed early. The law now requires that the renewals cover the 5 years from when the permit expires.

The South Carolina House of Representatives this week voted on a bill that would allow concealed carry reciprocity with other states. The bill passed the house by a margin of 85-23 in favor.

Having now passed in the House, the bill will move on to the state senate in the final week of the current session. If it does not make it through the South Carolina senate next week, the bill will still have another year to win passage.