As the Old Saying Goes – “Don’t Mess with Texas” 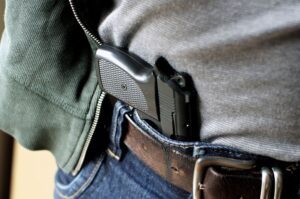 In a recent story out of Tyler, Texas, a father and son, both responsible concealed carry owners, had their weapons on them on the 21st of March this year when they witnessed the robbery of a man and a woman in progress.

The father and son never had to fire a shot. Instead, they pointed their weapons and instructed the robber to get on the ground, and he complied. The man was arrested and charged with aggravated assault.

The story gets more interesting. It turns out that the robber and the woman were partners in a plan to rob the man she was with, that she’d met on the Internet. So in the end, she was charged as well.

But these aren’t the only recent instances where a “good guy with a (concealed) gun” made a difference.

On January 22, 2017, a concealed carry owner at a mall in San Antonio, Texas stopped an armed robber, but unfortunately not before the criminal was able to shoot and kill an unarmed man.

In the process of trying to stop the robbery of a Kay Jewelers, an unarmed good samaritan who tried to intervene was shot and killed. Another shopper, who happened to have his firearm with him, shot  and injured one perpetrator while the second ran. Police were able to capture the second suspect after his car crashed exiting the scene.

While it’s unfortunate that the unarmed good samaritan was killed, there is the possibility that many others could have been harmed or killed during this crime if the concealed carry owner hadn’t stepped in.

In one of the most stunning cases of a gun owner as good citizen, a passerby on Interstate 75 in Florida came across a deputy in need of assistance.

While investigating an accident in November last year, Deputy First Class Dean Bardes was passed by a car on the shoulder at a very high speed. Bardes gave chase, and eventually both he and the speeder pulled over to the side of the road.

The driver jumped out of his car and began fighting with the deputy. At one point he tackled the deputy and began beating him. The deputy called for help while the suspect was on top of him, pummeling him. Video of this incident can be seen here.

Lucky for the deputy, a licensed concealed carry owner was passing by just at that time. He pulled over, pulled his gun, and instructed the man beating the deputy to stop. When he didn’t, the owner fired, shooting him 3 times. The suspect died of his wounds. Who knows what would have happened to the deputy, though, if the “good guy with a gun” hadn’t arrived on the scene.

If you Conceal Carry, Why Not Use the Slimmest Possible Profile?

Got any more stories where a responsible citizen saved the day? Let us know in the comments below.